My most anticipated 3 seconds in sports

Its been called the most exciting two minutes in sports. For me and my colleagues its about three days of work leading up to three seconds of action as we capture the finish of the Kentucky Derby from every angle.

My job in particular is to operate seven cameras at once under the rail capturing the winning horse and the iconic spires of Churchill downs, with each camera capturing about half a second of the horse passing by. The first time I did it, 10 races ago, I was petrified that I would mess something up or miss the images every one was counting on. Over the years I have been able to relax, having learned that all the cameras are not going to be spot on every time.

Part of the strategy is to anticipate where the winner will finish. When it’s dry, I was told to expect the winner to be close to the rail. When it’s wet, I was told to expect the horse to be 10 or more feet out. In the 10 years I have done the race this has been mostly true, but I have to anticipate that even in a wet year, like this one, the horse could finish close to the cameras. So I end up focusing cameras six feet out, 10 feet out and 20 feet out and using a variety of focal lengths in hopes of getting a perspective that features the biggest horse possible in relation to the steeples. Sometimes, like this year, the horse finishes in the sweet focus spot for both a camera set up for a rail finish (below) and a 10-15 feet out camera above, resulting in almost two identical moments with a slightly different perspective. The image below was shot wider than it appears, since the camera was set up to capture a closer horse, while the image above is almost full frame. 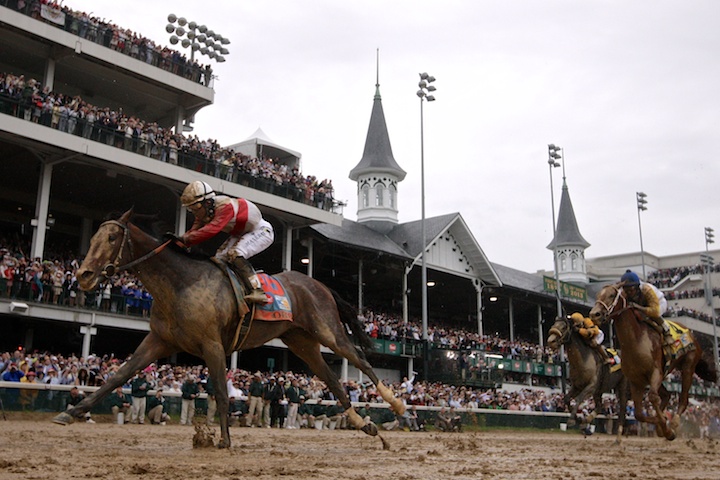 Orb, ridden by jockey Joel Rosario (L), passes the famous twin spires and crosses the finish first during the running of the 139th Kentucky Derby horse race at Churchill Downs in Louisville, Kentucky, May 4, 2013. REUTERS/John Gress

50 or so feet from the finish line, I set up this camera hoping to get a shot of the jockey celebrating, but unfortunately he didn’t do that in range of this camera this year. 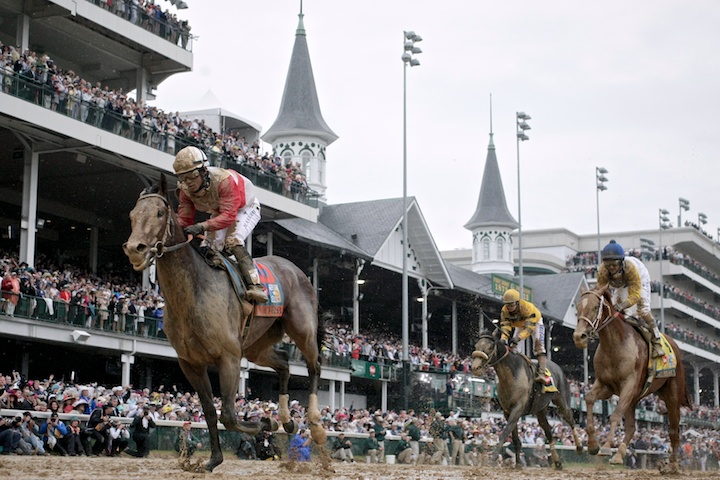 Orb, ridden by jockey Joel Rosario (L), passes the famous twin spires and crosses the finish first during the running of the 139th Kentucky Derby horse race at Churchill Downs in Louisville, Kentucky, May 4, 2013. REUTERS/John Gress

All of the cameras are wired together in a chain using special cords that connect them to regular household wire. When a button is attached and pressed at the end of the line, it fires all the cameras at once. However, I always set up a few cameras on wireless triggers in case the line fails for some reason during the finish. 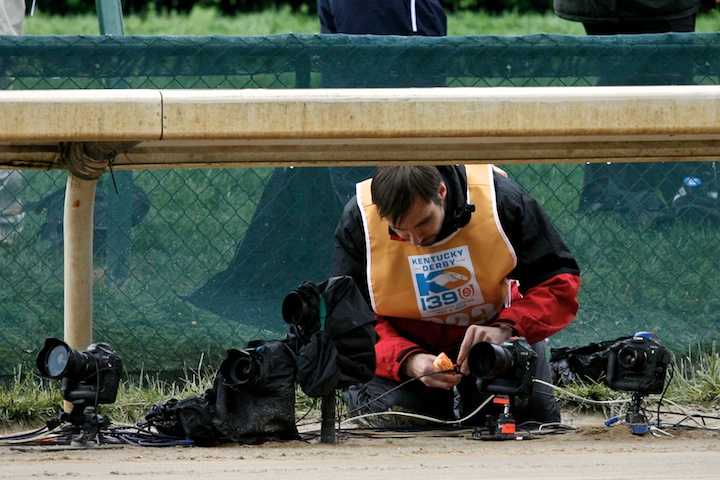 Moments before the race, my heart sank when my line of cameras shorted out and all the cameras kept firing on their own. A small amount of water bridging a connection was the culprit, which I cleaned off with the towel above after disconnecting the camera cord from the household wire. Photo by Nellie Hertenstein

I couldn’t do it alone and every race I have help from fellow photographer Matt Sullivan in the morning and an assistant in the afternoon. 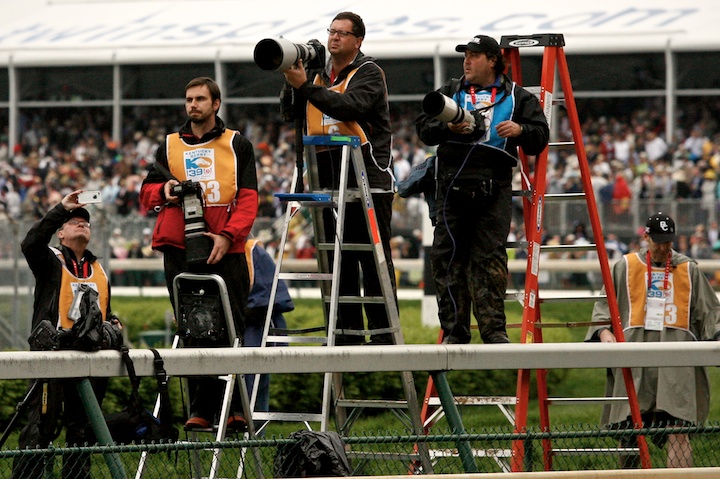 Moments before the race, I climbed above my trusty mount (2nd L) and nervously bit my lip anticipating the finish. Photo by Nellie Hertenstein 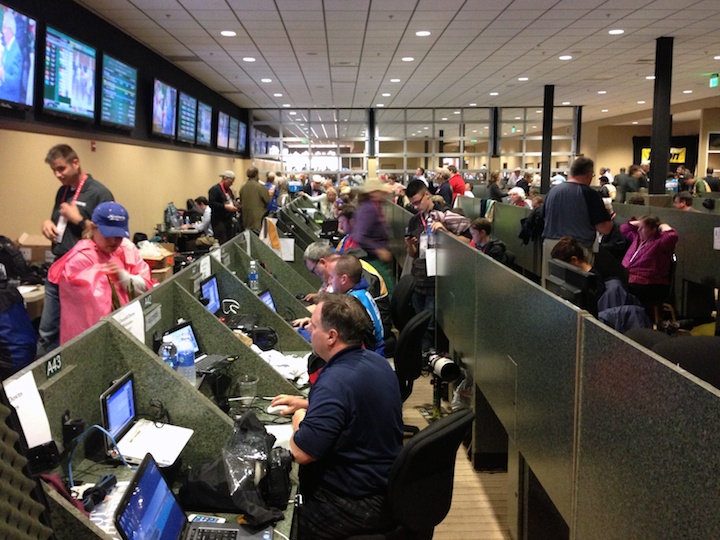 My Workmates, (front to back) John Sommers, Matt Sullivan and Jeff Haynes make sure all of our pictures were on the way to our editor as they sit in a room full of photographers after the race. 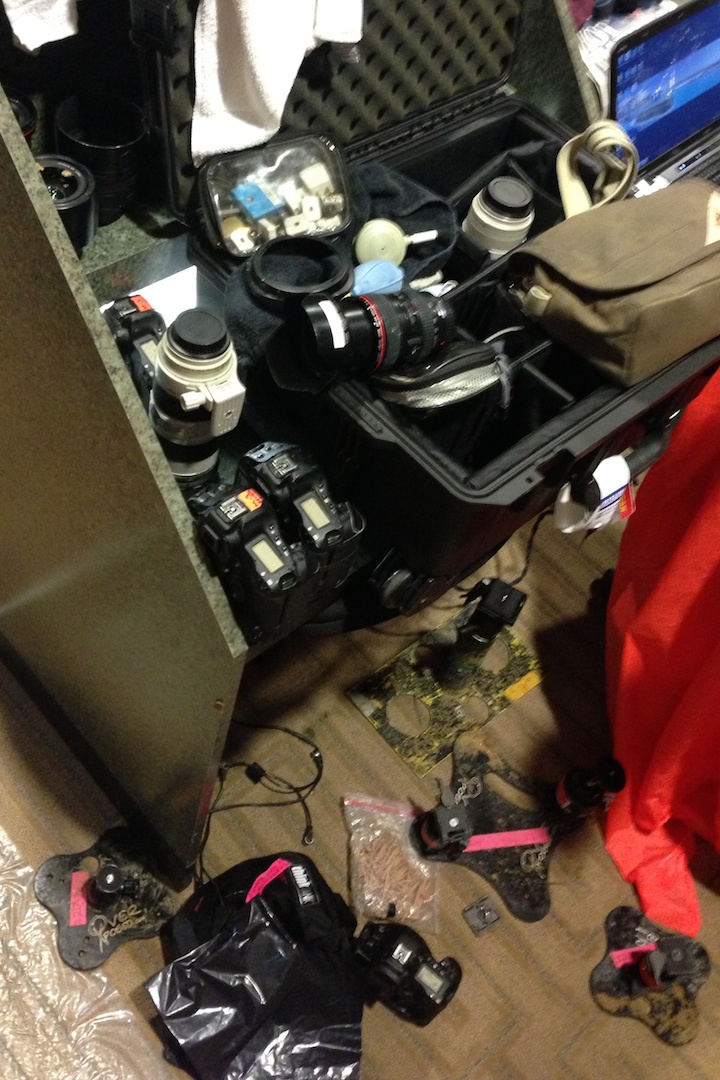 After the race, I spent an hour with the help of my assistant Philip cleaning mud off all of the seven cameras, lenses, floor plates and ball heads I used to capture the finish.

Race patron Rick Stewart wears a hat with a toy horse perched on top before the running of the 139th Kentucky Derby horse race at Churchill Downs in Louisville, Kentucky May 4, 2013. REUTERS/John Gress

My most anticipated 3 seconds in sports