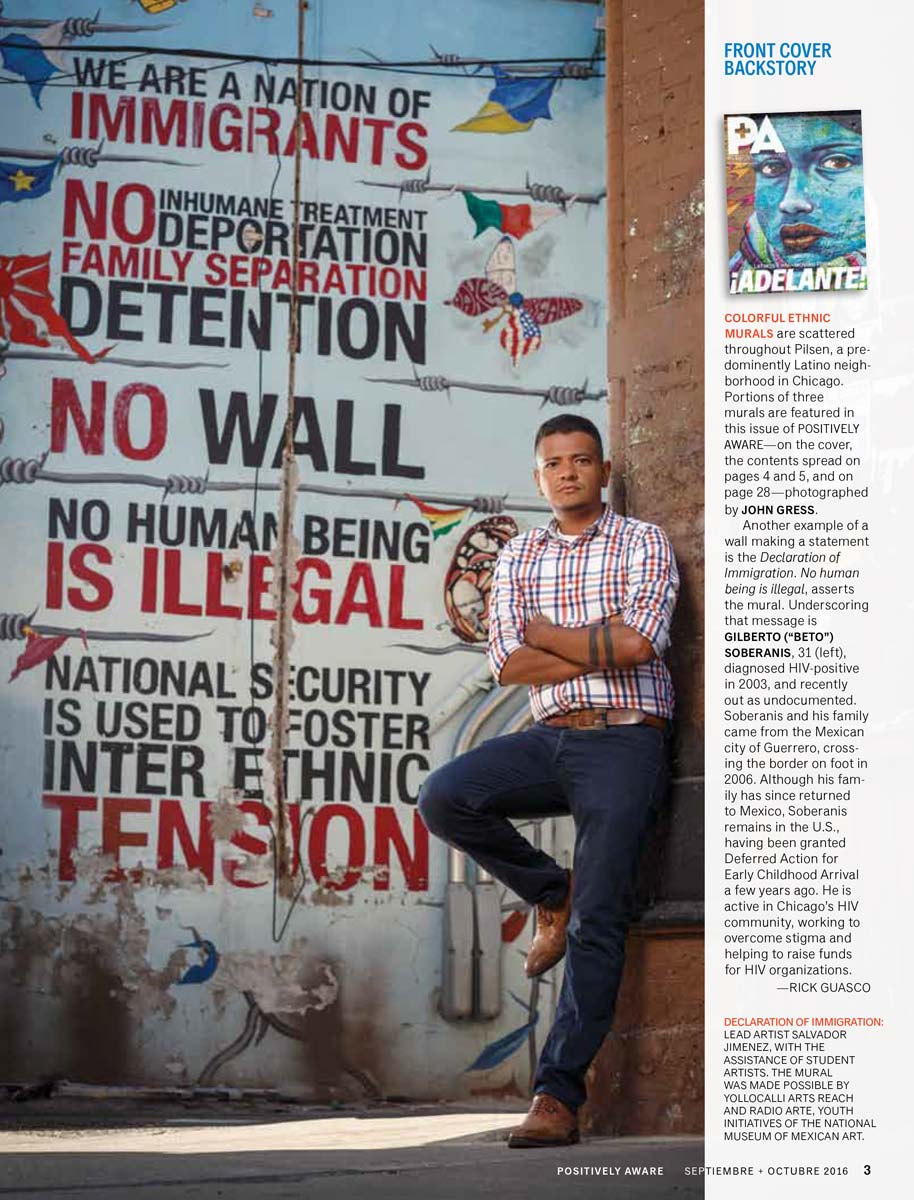 Positively Aware magazine and Art director Rick Guasco asked me to create a series of portraits for their September+October 2016 issue focusing on Latinos and HIV. Rick’s instinct was to photograph our subjects in front of Colorful murals in Chicago’s Pilsen Neighborhood. So after an hour or so of online research, we headed out to the neighborhood to see if what we found in cyberspace would work as backgrounds for our real people.

Armando Ramierez-Guzman, 26, was born in Guanajuato, Mexico and Emigrated to the U.S. when he was six years old. He was Diagnosed with HIV in 2003. Portrait by Photographer John Gress

Given that our shoot had to take place mid morning to accommodate our subjects’ schedules, I had to find a way to tame the mid-day sun. So I put together a 4×4 frame and skinned it with Roscoe 3004 Half Intensity Soft Frost diffusion material, which cut down on the harshness of the light and also reduced it’s brightness by 50%. Then I put a Elinchrom Rotalux 100cm Deep Octa softbox on the other side and paired it with a Chimera Chimera Medium Stripbox over their opposite shoulder. Effectively, the sun became my fill and I didn’t really need to worry about the direction of the natural light because my background was flat and mostly lit by the octabox. I used the same approach on the two “face” portraits. 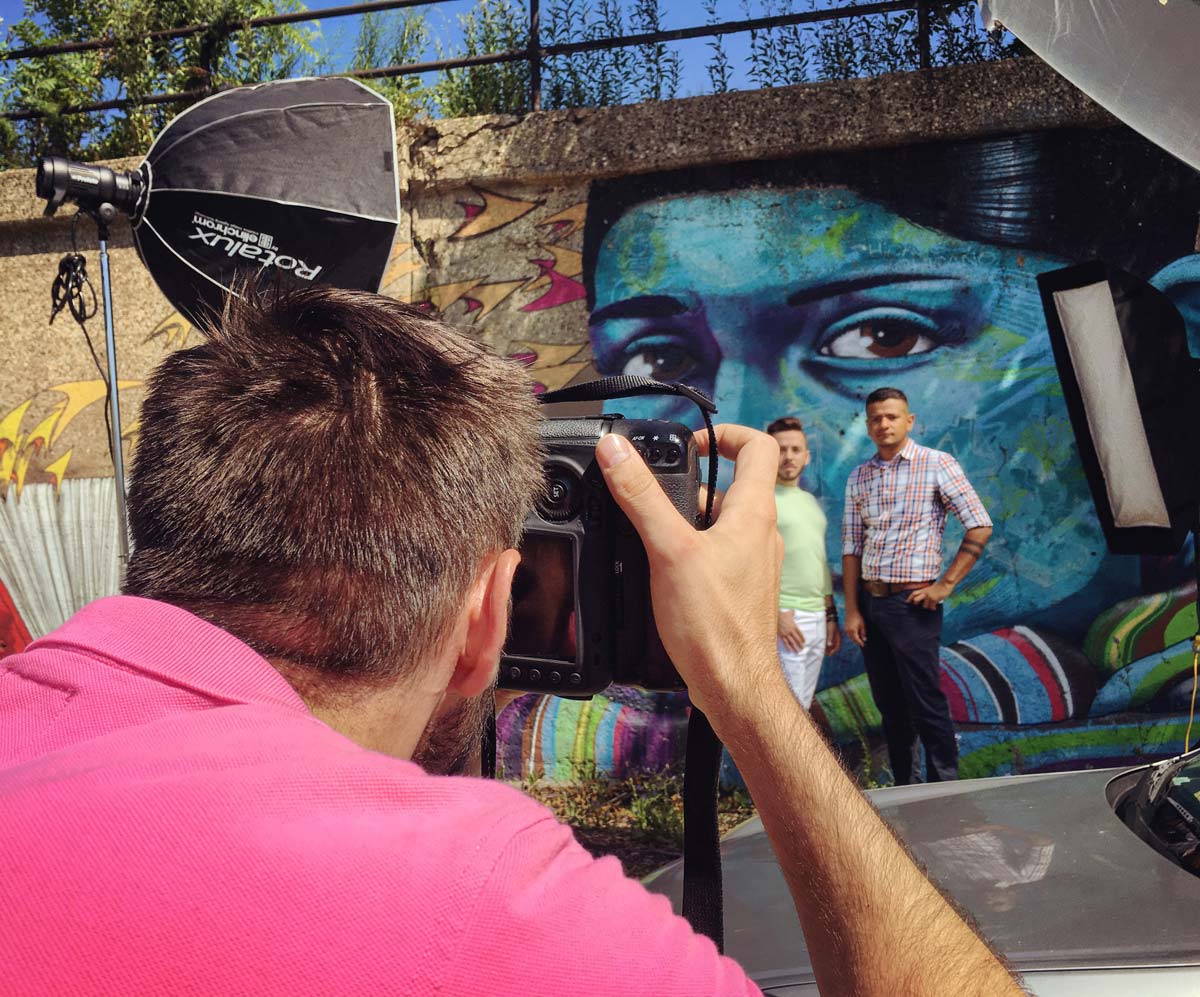 Behind the scenes photography of me shooting Beto Soberanis and Armando Ramierez for Positively Aware Magazine in Chicago’s Pilsen neighborhood.

The sun wasn’t much of an issue when I was shooting Beto (below) since it was blocked by the building he was leaning against. So this time I placed the octabox opposite of the sun. Then I put the strip box across the alley, just outside of the frame on the left side to edge his body and separate him from the background. I would have moved it closer, but cars kept driving through our set.

Colorful ethnic murals are scattered throughout Pilsen, a predominantly Latino neighborhood in Chicago. Portions of three murals are featured in this issue of POSITIVELY AWARE—on the cover, the contents spread on pages 4 and 5, and on page 28 of the print edition—photographed by John Gress. Another example of a wall making a statement is the Declaration of Immigration. No human being is illegal, asserts the mural. Underscoring that message is Gilberto (“Beto”) Soberanis, 31 (left), diagnosed HIV-positive in 2003, and recently out as undocumented. Soberanis and his family came from the Mexican city of Guerrero, crossing the border on foot in 2006. Although his family has since returned to Mexico, Soberanis remains in the U.S., having been granted Deferred Action for Early Childhood Arrival a few years ago. He is active in Chicago’s HIV community, working to overcome stigma and helping to raise funds for HIV organizations.

Since its founding in 1990, the Latino Commission on AIDS has become the largest organization in the U.S. advocating for the health needs of the Latino community in response to the HIV/AIDS epidemic. Also known as Latino AIDS, the commission works with community organizations in developing HIV education, prevention programs, and capacity building. The commission, which began in New York City, now serves Latino communities in more than 40 states and Puerto Rico. Guillermo Chacón has been president of Latino AIDS since 2009.

JEFF BERRY: What do you see as some of the broader issues facing the Latino community?

GUILLERMO CHACÓN: First of all, it’s extremely concerning that new HIV infections have increased among young black MSM [men who have sex with men] and young Latino MSM. It’s around 21%, for Latinos, of new HIV infections in the latest data. We are always concerned about the effectiveness of our response. And when I say our response, it’s the communal one. It’s the CDC, it’s the community. One particular segment we recognize is the transgender community, which we need to understand and engage because they are one of the most challenging that we face. That’s something that has been reported, but it’s not a national commitment. I use “trans” because it’s my understanding that there are striations and variances in the community. Someone came to me and said, “We prefer ‘trans.”

But also I’m sure you know that when we look at Latinos in general we also need to identify women who are still being impacted. I always try to be careful and mindful about explaining to many community-based organizations throughout the U.S. that the reason why so much attention focuses on women is because of new HIV infections among this population. Now, of equal concern for us is the level of homophobia that I believe represents a major challenge for our community across the board. The stigma of homophobia and transphobia is across all communities and all institutions.

Click here to read more about this topic in Positively Aware magazine. 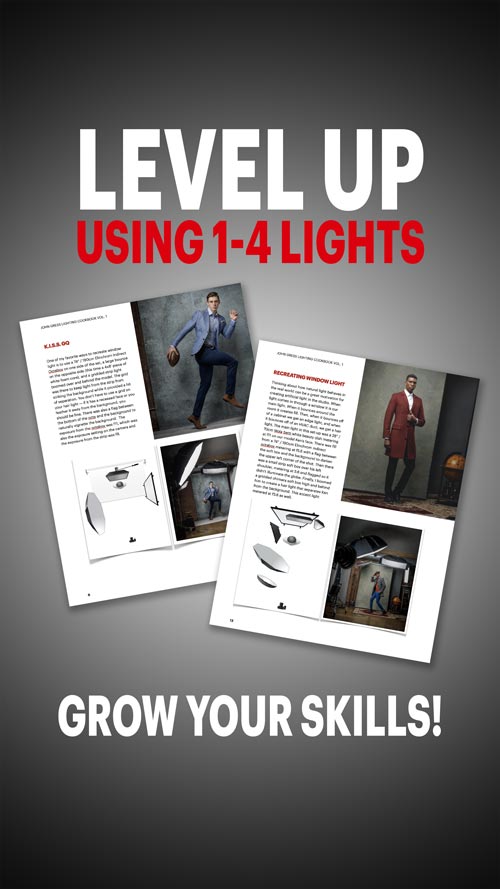