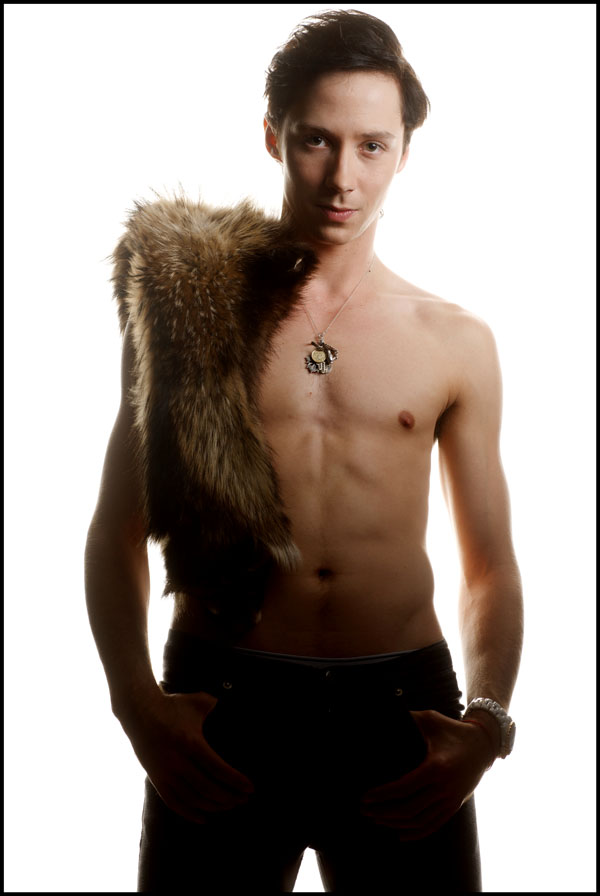 I just found a Finnish article using a photo I shot of figure Skater Johnny Weir. The shoot with Weir in 2009 was interesting to say the least thanks to his unexpected props! 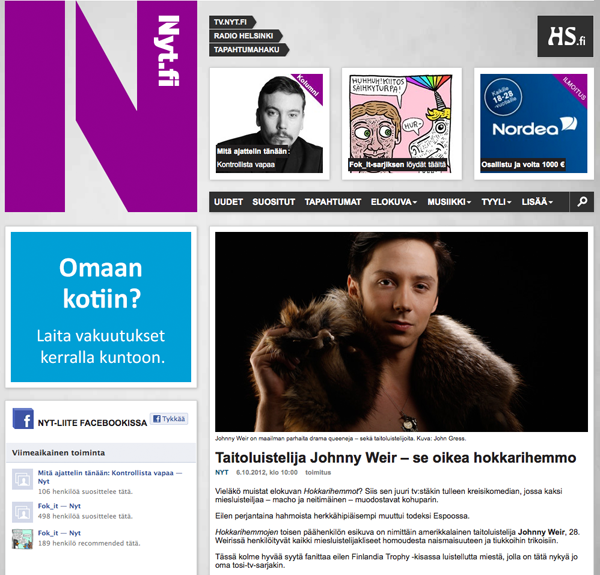 I don’t usually post an entire article, but I will this one. But only because most of you, including myself, don’t speak Finnish! I found the translation below on a fan site.

Yesterday (Friday), the more sensitive of the two characters came alive in Espoo.

The model for one of the main characters in Blades of Glory was American figure skater Johnny Weir, 28. Weir personifies all the male skater clichÃƒÆ’Ã‚Â©s: gay, girly, and wearing tight spandex.

Here are three good reasons to be a fan of Weir, who competed in Finlandia Trophy yesterday and even has his own reality-TV series.

The last time Weir competed was in the Vancouver Olympics in 2010. He thought he had skated the free program of his life, but the judges left him in sixth place.

Weir, upset, cried bitter tears in front of the press, put his competitive career on hold, and focused on appearances at celebrity parties and fashion shows. Now he plans to rise back to the top and is beginning his journey in Finland. His music for the short program is, of course, a version of “Poker Face,” given to Weir as a present by Lady Gaga herself, and the theme for his free program is a phoenix rising from the ashes. What else.

“Now I’m angry. I will show that I’m a real warrior,” Weir said defiantly to Next Magazine. [Not an exact quote.]

Also returning to competition this season is Weir’s rival and teammate: Olympic gold medalist Evan Lysacek. The setup is straight out of Blades of Glory, as Lysacek is known for his masculine, powerful styleÃƒÂ¢Ã¢â€šÂ¬Ã¢â‚¬Ârather like Will Ferrell’s character, Chazz Michael Michaels.

The two skaters were at odds in 2010, when Weir called Lysacek a “slore,” a combination of “slut” and “whore” that Weir thought up himself. Both are now aiming for a spot at the next Winter Olympics in Sochi. The scene is set for a thriller.

Weir is known for his costumes, which he designs himselfÃƒÂ¢Ã¢â€šÂ¬Ã¢â‚¬Âand nothing is too much for him. In the early 2000s, he joked to the American press that he wanted to look like a “Care Bear on acid” and “an icicle on coke.” In his most famous free program, Weir played the part of a swan, with his own gloved arm taking on the role of its neck and head. Weir named the glove “Camille.”

Other creations of his include an oil-cloth corset with pink tassels [for his “I Love You, I Hate You” short program that he skated in the 2010 Olympics], and various furs. He received angry feedback from animal-rights activists in 2010 and quit using fur in his costumes for a time. He has since announced that he does not care about threats and will continue to wear fur for as long as he can afford to.

Off the ice, Weir dresses in, for example, sequined jackets and leather shorts. On his shoulder is an expensive, classic Birkin bag from HermÃƒÆ’Ã‚Â¨s.

Weir only started skating at the age of 12, which is exceptionally late for a competitive skater.

Weir’s Wikipedia page claims that he managed an axel during his first week of practice. The axel is considered the most difficult jump in figure skating.

According to coach and figure-skating commentator for YLE [Finnish TV station] Anuliisa Uotila, under all the glitter, Weir is genuinely a top-tier athlete.

“He is a fantastic skater and also a real artist.”

Uotila predicts that Weir’s return to competition will be exciting.

“Comebacks like this rarely succeed. But if he can reach the level he was at before, he will certainly stand out.”

Who on earth is Johnny Weir?

Johnny Weir is a three-time US National Champion, a Junior World Champion, and a Worlds bronze medalist.

His life also is the subject of the reality show Be Good Johnny Weir. The show’s film crew was supposed to follow him to Finland, but the trip was cancelled at the last minute.

The highlights of the show’s second season [article says “first season,” but they mean this season, which is the second] include Weir recording his debut single, “Dirty Love,” which made the charts in Japan.

Weir married lawyer Victor Voronov on New Year’s Eve 2011. The skater came out of the closet earlier that same year because he wanted to offer support to teenagers who might be contemplating suicide because of their homosexuality.

Weir does not want to go into coaching after his competitive career because it gets too cold standing around at ice rinks. [Or, more precisely, as he told Next Magazine: “I spent so many years freezing my ass off in a cold ice rink I donÃƒÂ¢Ã¢â€šÂ¬Ã¢â€žÂ¢t want to be 60 or 70 and still freezing my ass off.”]