The first time I showed my old assistant my Profoto D1 Air 500 Monolights he remarked how sexy they were…. that’s all he kept saying… “these lights are so f&*king sexy!” I can only imagine his sophomoric reaction if he got his hands on the more attractive Broncolor Siros, which comes in multiple flavors from the battery powered 400ws and 800ws

So what makes the Broncolor Siros S monolight so irresistible? It’s not something you would notice right off the bat, because it’s size and Broncolor blue accents really define it’s initial appearance, but the biggest difference between this light and the Profoto D1 is that the flash tube sits outside of the head, which will allow light to spread in a hemisphere with some modifiers, unlike the 70-degree beam from it’s competitor, resulting in more evenly lit subjects and softer light…. but more on that later….

When I un-boxed the Broncolor Siros 800 S

my first reaction was wow… this is huge. However, the Broncolor looks larger thann the Profoto D1 Air 500 because of its uniform cylindrical design. It’s maximum dimensions are very similar. In addition, the Broncolor comes with a removable reflector built into the design and unlike the Profoto’s standard dish, it feels more robust and less likely to become warped or dented over time.

A few years ago I looked at getting one of those massive bags that holds 4 lights and 4 stands, but I gave up when I realized how big it would have to be to hold 3-4 for my Profoto D1 Air 500 Monolights and just how much it would weigh. Given the size of the Siros lights, that is really out of the question because they are slightly longer and weigh almost 2 lbs more. 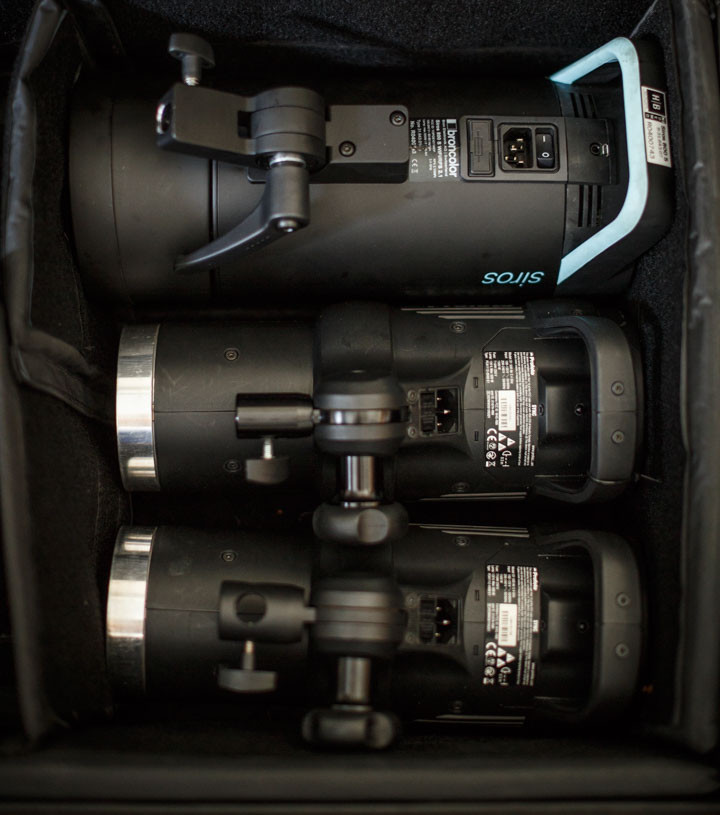 However, given that the maximum dimensions of the Broncolor Siros is similar to the Profoto D1, I can still place them in basically the same cases I normally use. One thing that is important to me is that when I travel I like to put 4 monolights in a Pelican Storm Case IM2950, which I could still do with both brands. Loaded, it comes in at over 50 pounds, but that’s not an issue on Southwest Airlines as long as you have some media ID or something saying you’re a “video production company,” so I had it printed on my business cards. When you check in just tell them “it’s media” and there is no up charge for a over weight / over sized bag.

When using my Elinchrom 74-Inches Octa about 3′ from the model, as seen below, I used the D1 500 at 330ws (power 9.3) on the left, to shoot at f9 and the Broncolor at 560ws (power 9.4), on the right, to achieve the same exposure. I need to apologize to our model James for not taking a better photo with the Siros during his impromptu jump on set. As you can see from the detail shots, given the specs you would expect the Profoto at this power to blow the Broncolor out of the water when it comes to freezing action, it didn’t.

In addition, when looking at the face of the modifier you can see that its very even regardless of the monolight. 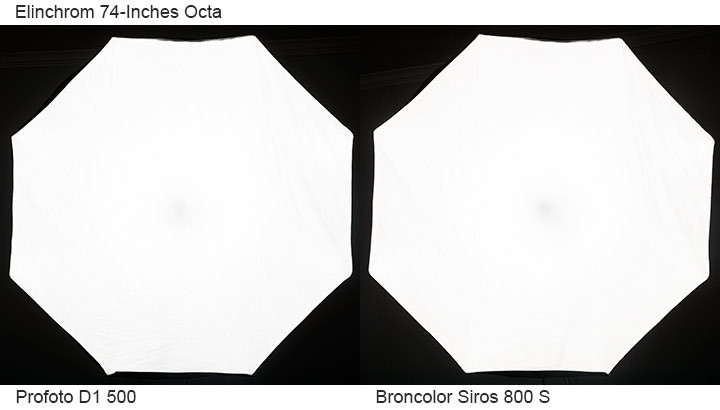 Rather than get in an argument over is this one as bright as that one, its probably better to just ask your self are each of them bright enough? And the answer is yes. To shoot at f8 when using the Para 88, I typically set the Siros 800 S at 100-200ws (power 7-8).

At first, I used the Broncolor Siros 800 S outdoors with my Paul C Buff Vagabond Mini Lithium battery with very mixed results. I would power up the light, set the power, tell the light to beep when ready and then I would turn on the radio slave. Next I would compose my shot, pull the trigger and it would flash and beep. Then when I pressed the shutter again, nothing would happen. So I would walk over to the light and discover that the light had reset its self, so I would repeat this stupid cycle over and over again. But eventually I grew lazy and didn’t turn on the beep because it saved me 15 seconds and that is when I discovered that the battery and the light worked together just fine without the beep. Which leads me to believe that the beep and the flash capacitor together must draw more than the maximum the vagabond can deliver. Working without the beep actually wasn’t bad because at power 7-8 the light recycles very quickly.  I was able to use two of my Profoto D1 Air 500 Monolights on a vagabond at the same time, but I suspect that wouldn’t be possible with the Broncolor Siros 800 S , but I can’t know for sure because I only have one at the moment.Also I can say its its possible to use two D1 1000 Monolights at the same time either. 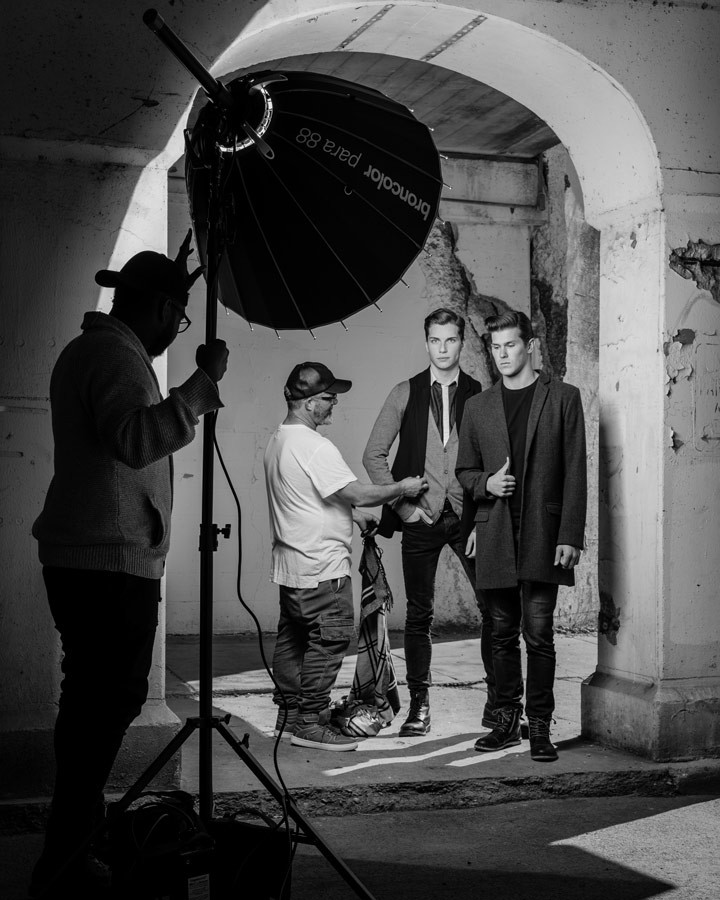 One thing that disappointed me about the Profoto D1, which seems to have disappointed many others, is that the flash tube is recessed inside of the head’s body. In a previous article I discussed how the two different types of Profoto heads preform, and in general, I concluded that the pro heads were superior to the D1 heads when it comes to filling beauty dishes and most large modifiers.

It wasn’t until I compared the D1 head to the Siros head that I discovered that uneven light from a modifier results in harsher light, where as before I expected it to result in only an exposure gradient, which it does. As you can see from the samples below the Siros produced softer more even light than the D1 when using a Photek Softlighter II 60-Inch Umbrella. 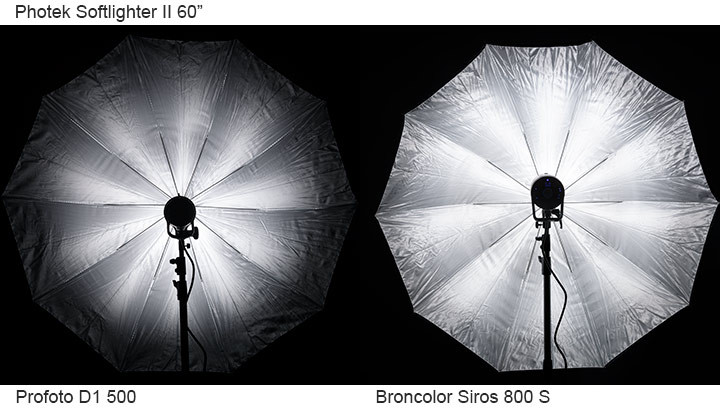 One of the other biggest design differences between the two brands is that Profoto’s heads slide into modifiers which then pinch on to the barrel of the light head via a metal lever tensioned rubber ring, where as the Broncolor and most manufactures have a bayonet design where the modifier ring docks with the flash head similar to how a lens locks onto your camera. I got my hands on a Broncolor to Elinchrom softbox adapter and discovered that when you place it on the head the ring envelopes the flash tube, thus effectively causing it to be recessed, just like the Profoto D1 head.

The Para basket or birdcage mount for the Siros doesn’t cover the flash tube in any way.

#behindthescenes from my #photoshoot yesterday with @tbbuccaneers first round draft pick @dajuice_80 for @PaniniAmerica at the NFLPA #RookiePremiere at the Los Angeles Memorial Coliseum. The light in this shot is coming from a #BroncolorUSA #Para88 and two strip soft boxes. I was also using a separate lighting setup on the same set and bouncing back and forth between the two of them with a #PocketWizard on speedcycler. #Broncolor #ChimeraLighting #buccaneers #Whodoyoucollect #johngressmedia #PaniniAmerica #OJHoward #portrait #makeportraits #flashphotography #portraitphotography #setlife #portraits_ig #canonusa #pursuitofportraits #johngressmedia #profotousa #iso1200 #octabox #profoto #studiophotography #famousbtsmag #profotoglobal #laphotographer #softbox Photo and assisting by the indispensable @zach_barron Art direction by the amazing @txholla A post shared by John Gress (@johngressmedia) on May 21, 2017 at 7:40am PDT

Unfortunately, I could not test the Siros in a beauty dish because I don’t have one that would fit, but I suspect that given it’s out of body tube design and dome combined with the mount it would perform better than the D1.

Remotes and the bronControl app

Upon using the monolight, I found the ability to control it with both my phone and their 2.1 remote, combined to be more helpful than the Profoto Air Remote

. One of the best things about the app is you can see the flash power settings of the of the heads and then adjust them as needed. So if all of a sudden you need them to all be the same power at an event or something you can make it happen. It also shows you the flash duration in t.1 (measuring the center 80% of the light output), which is still a little foreign to me because I have spent a few decades thinking in t.5 (measuring the middle 50% of the lights output), but I am sure with practice it will become more helpful. 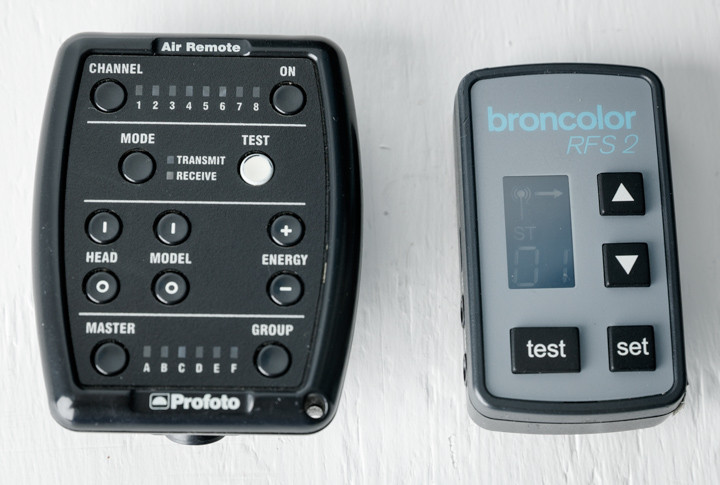 However, I would really love to have an on camera controller with a button for each of the flash groups that I can quickly select, rather than making me cycle through all of them until I get to the right one. I have read with the 2.2 remote you can achieve high speed sync and unlike the B1, you don’t lose the 3 stops of power, which makes the Siros instantly more attractive, although I think Profoto fixed this problem with the D2.  But then again, I have never used HSS or TTL which the Siros is lacking….. so what do I know.

If you live or work in New York you can finally be happy about something!

When it comes to light quality, The Siros clearly out performs the Profoto D1 in umbrellas but it may be an even playing field inside of octaboxes given the Bron mount design. But, If you were to buy a D1 and the accessory glass dome to make them more evenly matched, you’ll be spending more than you would on one Siros. Plus the Siros also comes with the reflector I mentioned earlier, which Profoto sells for over $150.

Once you start reducing the Bron’s power it has much shorter flash durations than the D1 and you can take it down even lower making it more useful when matching ambient.

I think Profoto does a really good job with their professional line, but they could do a better job with their monolights. If you have D1s and want pro head performance, maybe Acutes will work for you or you can buy a used Pro6 pack on ebay like I did for $450 and pro heads for around $700-900. But if you just own a few Profoto Items I would seriously consider switching to the Siros. If you’re just getting into lighting and haven’t made a significant investment in one line or the other, and you are considering the Profoto D1s or Broncolor, then I would definitely go with the Siros . 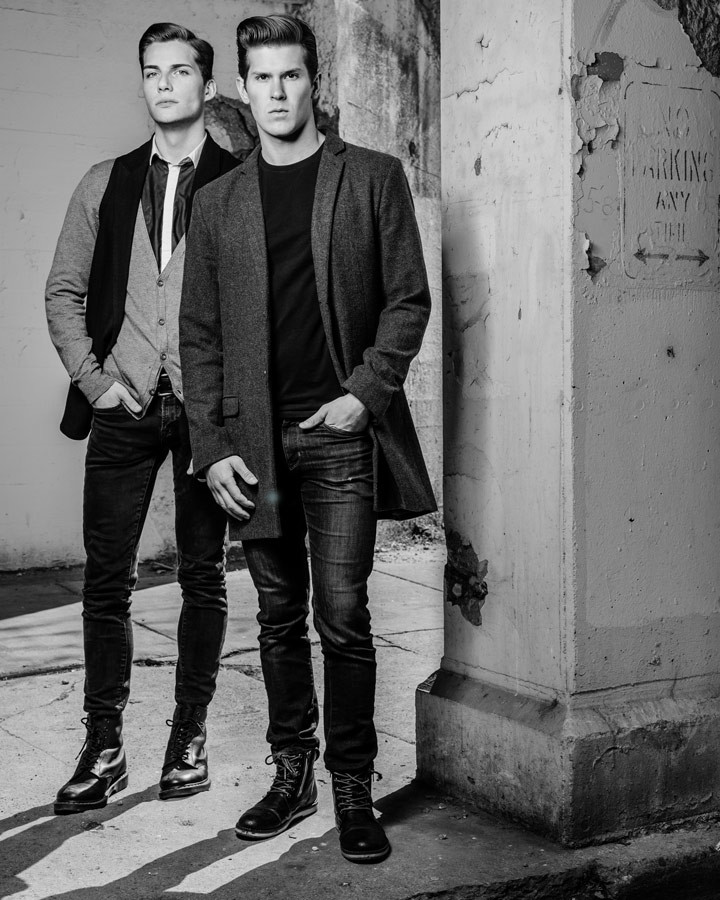 Prev Elinchrom vs Profoto: Why I Own 4 Octaboxes
Next Headshots with Chicago Model Kenneth Hill