When the Canon 1D X Mark II was announced, the autofocus features intrigued me. Then when the Canon 5D Mark IV

came out I was disappointed, primarily by the 1.74x crop factor when shooting 4K. So I bought the 1D X Mark II (1.3 crop) to use not only as a still camera but as a workhorse on my DJI Ronin-M gimbal. As a still camera it was great, but I did wish it had more megapixels.

Even after buying a CLog picture style from EOSHD, I wasn’t wild about the results. The dynamic range wasn’t what I was used to from my Canon C100, but the camera still shot great footage. However the lack of shadow detail at times was concerning. I just felt like there wasn’t enough latitude to hold highlights and shadows in some situations like the piano scene in the music video below.

In addition, I felt like I was being buried in data that was clogging up final cut because it wasn’t in a format that the NLE could readily process. But the 60P was really useful when it came to making really cool slow-motion videos for my clients.

So when the C200 was announced it peaked my interest because not only could it shoot proper CLog and Clog3 in camera and autofocus like the 1D X Mark II, it had a Super 35 sensor (crop factor 1.4x), which is similar to the sensor of the 5D Mark IV

, and it can capture it all in a more compressed codec (150mbps). In addition the C200 can shoot RAW as well when the project calls for it, but RAW video takes up twice as much space as the 1DX2 4K footage. However it takes your footage to all new levels and in one of the scores of videos I watched prior to buying the camera, a Canon rep said that they build their cameras intending for customers to use them for five years and two years from now storage and media will be a lot cheaper and processing power will be better too.

cameras with CLog, to use primarily as my still cameras.

but i didn’t like the user interface when using the autofocus and, unlike the C200, it lacks 60p 4k. However, the Canon C300 Mark II

is capable of shooting higher color bit rates in camera, but the C200 can make up for it with external recorderers and 12-bit RAW, which is exclusive to this camera.

All the footage is 23.98P, All of the C200 footage, unless otherwise noted is CLog3 and the C100 footage is CLog. The external footage was recorded with an Atomos Shogun. 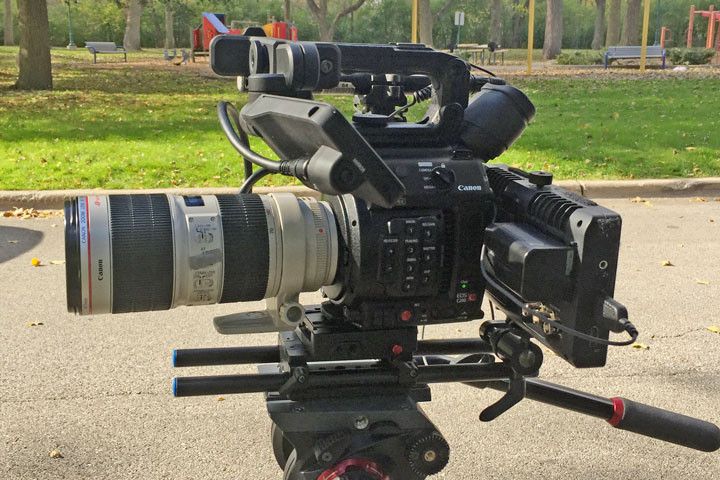 I have been using my Canon C100 (which I will now use as my B Camera) since 2013, and usually I record the footage externally, with an Atomos Ninja2 or Atomos Shogun, but I haven’t noticed too much of a difference between the internal footage and the externally recorded footage, until today, when I shot some tall grass at f8 with and without the recorder and I noticed there is a lot more detail in the externally recorded footage. That scene also showed me that the best footage I will probably get from the C200, aside from 4K RAW, is externally recorded ProRes 4:2:2 LT 8 Bit QFHD (I should see if HQ or regular makes much of a difference). QFHD 422LT is 328Mbps / 148GBhr, 422 is 471Mbps / 226GBhr and 422HQ is 754Mbps / 318GBhr. Which is a lot less than the 512/GBhr you’ll be shooting with raw and the 716/GBhr of Prores you’ll need to create to edit the 4K RAW.

Now I could be completely wrong and I might find that the 10-bit HD will be better for grading than the QFHD, but what do you think?

I had some difficulty getting the camera and Atomos Shogun to work together, and thanks to some wonderful support from Atomos we figured it out together. When using the HDMI cable, I had to turn on “Rec Command” and “HDMI Time Code,” so that it would send the trigger signal to the recorder. Originally I didn’t turn this on because I thought it was going to put the time code on top of the video. Then I set the Shogun to trigger via the HDMI. 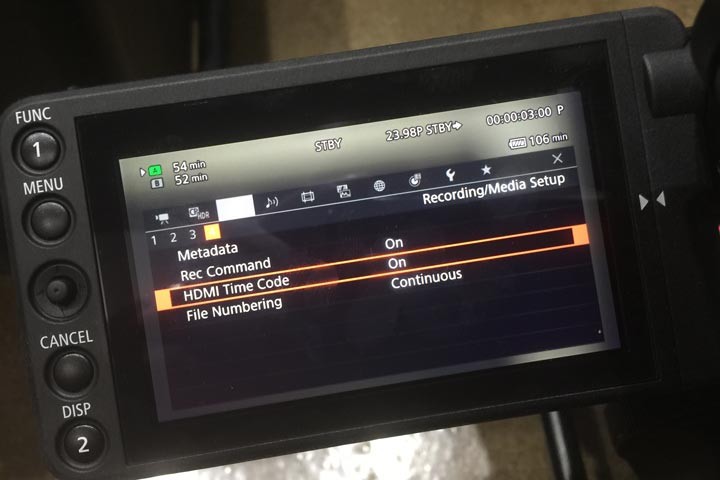 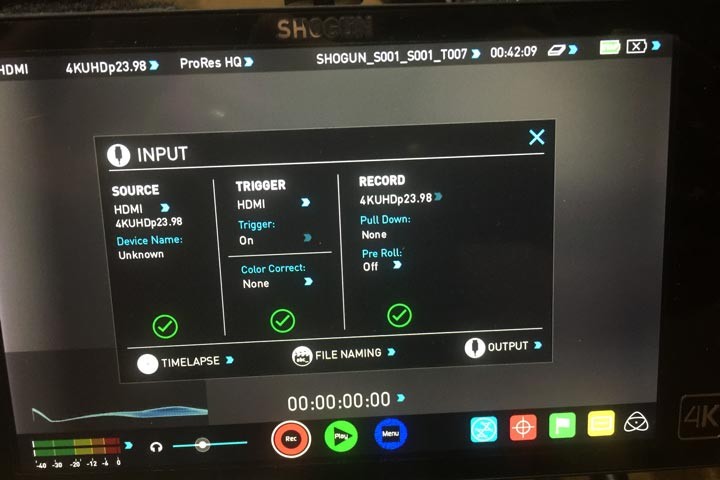 When using SDI I did the same thing I did for HDMI, but I discovered that the Shogun cannot record 2K and when you shoot raw internally and feed the recorder both 2K and FHD it records the left side of the feed only, clipping off a little of the right side. When you set the camera to output FHD while shooting raw, the same thing happens, even though you would expect it to record letterboxed FHD. When using the SDI and recording MP4 internally, the shogun records FHD correctly. When you shoot Raw internally and record the HDMI signal with the Shogun, it is letterboxed FHD and when you shoot MP4 internally the HDMI signal is either QFHD or FHD. That said, the only reason I can see to use the SDI with this recorder is to record 422 10-Bit FHD while recording MP4 internally, because SDI is the only way you can feed all 4 channels of the cameras audio to a recorder.  You can record 422 10 bit FHD and 8bit QFHD with the HDMI cable, but it only supports two channels of audio.