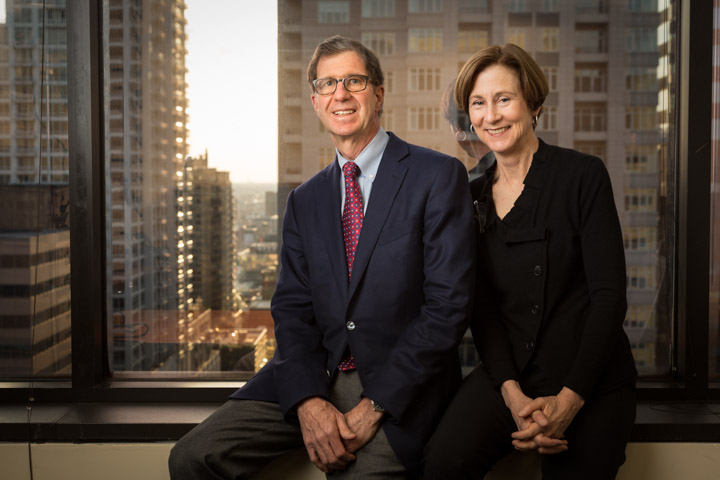 It’s not unusual for a son to follow in his father’s footsteps. Steven B. Newman, A73, M77, M16P, certainly did, and he had a remarkable role model. “My father was a very distinguished, well-respected physician in the Chicago area,” Newman says. “He cared for people from all walks of life. He was a true believer in access to care and provided the best possible care to every patient in his practice. He practiced for over 50 years and was best known for his keen diagnostic skills, which he attributed to simply listening to the patient. While he cared for the likes of Bill Cosby, Jack Benny, and Jackie Gleason, his practice was really about taking care of the people of Chicago. He was inspiring in a lot of ways.”

After graduating from Tufts University School of Medicine (TUSM), Newman did his residency at the University of Chicago, where he met his future wife, Sara Neely Newman, M.D. In the following years, they had two children, Rachel and Sam. Rachel is now in her second year at TUSM.

“Our daughter is the third generation of physicians in our family, and I couldn’t be prouder,” Newman says. To honor their family’s legacy of healing, he and his wife have established the endowed Newman Family Scholarship. The gift will be matched and thereby doubled under the current Financial Aid Initiative. Newman and his wife established the scholarship in honor of his father, Dr. Edward Newman; his wife’s father, Dr. Levering Neely; and their daughter Rachel Newman. The gift will go to scholarships at TUSM for students with financial need, starting in fall 2014. …Read More