The video provided a great opportunity to play with a variety of camera rigs, including the use of a dolly and a jib. You’ll see hand held movements, as well as some zooms and focusing shifts, which I usually don’t employ. This time I decided they added to the video’s feel of organized chaos.

While the video took more time to set up than to shoot, the overall project took around 30 hours to produce. Most of the time was invested in composing every cut. While people tend to think of black and white as being an easier medium to work with, it was actually less forgiving because we had to match the contrast in each shot with the contrast from the previous shot, which was often taken with a different lens. My professional grade lenses have different contrast ratios, even when shooting in a controlled environment.

The monochrome montage was also a lot of fun, because it was my first time shooting a video with assistant Joshua Slater. 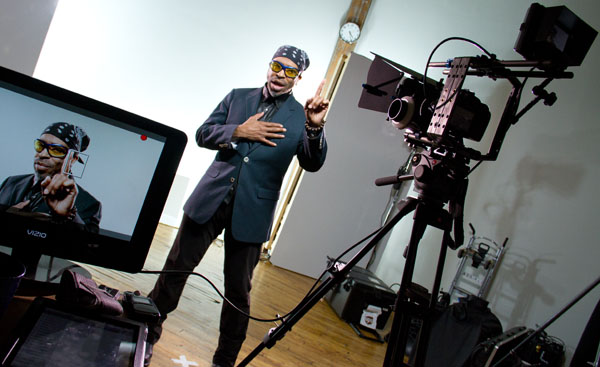 It took us about two hours to rig up my studio for the shoot.