Thousands of Chicago Public Schools teachers rallied at the Auditorium Theatre tonight to loudly voice their displeasure with their salaries and the longer school day thatÃƒÂ¢Ã¢â€šÂ¬Ã¢â€žÂ¢s being extended district wide next fall.

One of the key targest for the teachers was Mayor Rahm Emanuel, who has pushed the longer school day among other education reforms. His name elicited loud ÃƒÂ¢Ã¢â€šÂ¬Ã…â€œboosÃƒÂ¢Ã¢â€šÂ¬Ã‚Â whenever it was mentioned. 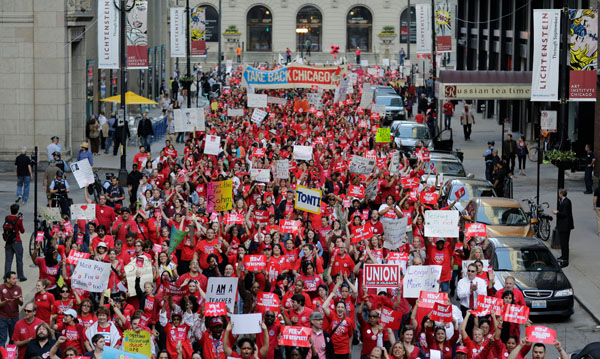 Thousands of Chicago Public School teachers march to the Board of Education's headquarters in protest in Chicago, May 23, 2012. Teachers say they are upset with contract talks, especially the offered 2 percent raise to work a longer school day this fall. REUTERS/John Gress