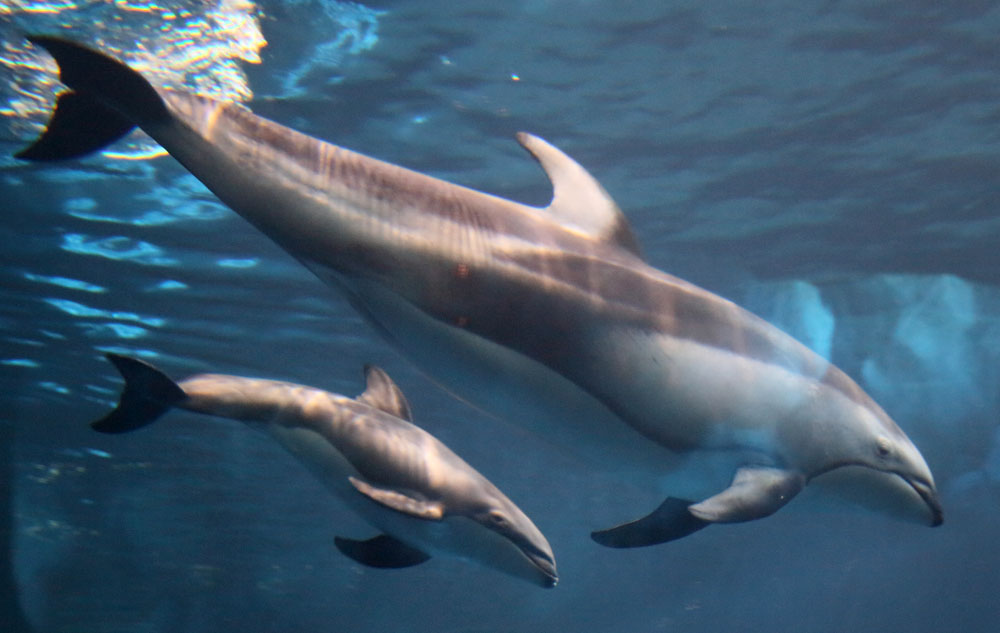 Pacific white-sided dolphin Piquet swims with her two-week-old male calf at the Shedd Aquarium in Chicago, June 12, 2012. According the the aquarium Less than 24 hours after its birth on Memorial Day, the calf began surpassing several critical milestones to mark the newbornÃƒâ€šÃ¢â€šÂ¬’s successful development, including bonding with mom and nursing regularly. Shedd’Ãƒâ€šÃ¢â€šÂ¬Ãƒâ€šÃ¢â€žÂ¢s animal health team estimates that he’Ãƒâ€šÃ¢â€šÂ¬Ãƒâ€šÃ¢â€žÂ¢s weighing in around 30 pounds, which is about 5 pounds more than he weighed at birth. REUTERS/John Gress

By Makini Brice, Medical Daily
Koko the gorilla can understand 2,000 American words, and can speak using American Sign Language. During the 28 years that researcher Penny Patterson has worked with her, she signs not just about food, but feelings as well. Alex the late African grey parrot could say up to 150 words, count up to six, and understand abstract concepts before the time of his death in 2007. On the night of his death, his handler Irene Pepperberg reports that his last words were: “You be good. See you tomorrow. I love you.” Dolphins have been understood to have different cultures, and elephants have reportedly had funerals for fallen comrades.

But, as the most intelligent species (ostensibly, to some people), shouldn’t we as people be able to understand animals? WouldnÃƒÂ¢Ã¢â€šÂ¬Ã¢â€žÂ¢t it be easier for us to learn their languages than the other way around?

Some researchers are, in fact, attempting to learn how to speak various animal languages, though it has been difficult. After all, some scientists remain unconvinced that animals do in fact have a language. Justin Gregg, a researcher at the Dolphin Communication Project, said to Live Science, “At present, there is no reason to believe that dolphin communication functions like human language, and thus there is no ‘language’ there for us to learn in the first place.” …Read More