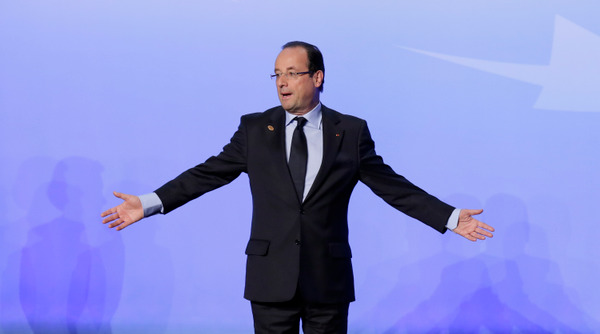 French President Francois Hollande gestures to reporters and photographers after posing for a group photo during the NATO summit on May 21, 2012 at McCormick Place in Chicago, Illinois.(Photo by John Gress/Getty Images)

Francois Hollande, the newly elected socialist president of France, looks set to achieve one of his main campaign goals and will impose a 75 percent tax rate on people earning more than $1.23 million per year,Ãƒâ€šÃ‚Â reports the Washington Post.

It’s thought that the tax,Ãƒâ€šÃ‚Â which is a marked increase from the previous rate of 48 percent, will be implemented by next year, according to AFP.

Ministers have said that the tax will be temporary, and is part of a plan to balance France’s books by 2017. Taxes already introduced are thought to be bringing in $8.7 billion this year… Read More