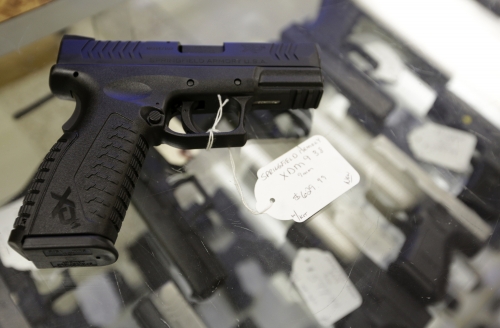 A hand gun, very similar to the gun used by alleged gunman Wade Michael Page, is seen at The Shooter Shop, where Page purchased the weapon, in West Allis, Wisconsin, August 7, 2012. The gun used in the crime was the crime was identical, only it had a shorter barrel. REUTERS/John Gress

An expert on gun violence prevention from UC Davis says that more background checks and denying firearms to people charged with criminal activity can help lower incidence of mass shootings like the ones that occurred at Sandy Hook, Aurora, Virginia Tech and Columbine.

“To reduce the number of deaths and injuries from firearms in the United States, we need to develop policies that require background checks for all firearm purchases, including private-party sales-the most important source of firearms for criminal buyers and others who are prohibited from purchasing guns,” said Garen Wintemute, director of the UC Davis Violence Prevention Research Program, in a news release.

Wintemute said that the U.S. owns more than 40 percent of all firearms that are in civilians’ hands even though it houses just 5 percent of the world’s population. Also, a diverse group of people have access to all kinds of guns that they can use under a widest array of conditions… Read more