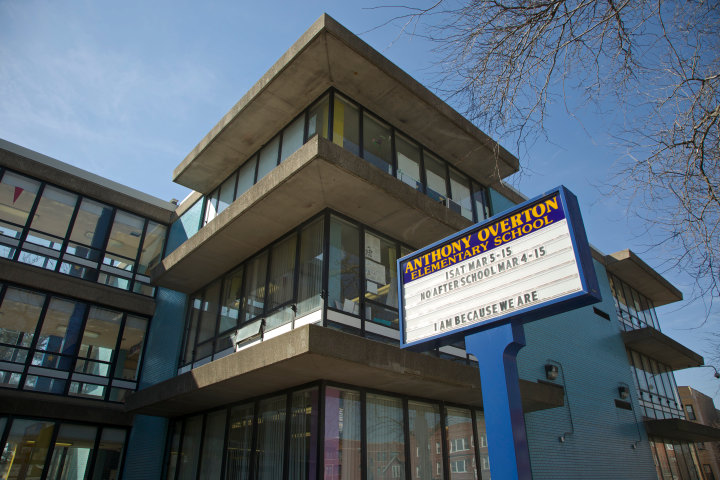 When I told a friend I was headed out to take photos of Chicago public schools, he replied, “Thats not sexy.” Unfortunately. everything I get hired to do isn’t glamorous.

There was however, a pleasant surprise. Anthony Overton Elementary School, designed by Perkins & Will, is an architectural gem, which I hope is repurposed into something great, like housing or commercial space. Though I fear that is unlikely given the decline of the neighborhood both in population and economics since the golden age of Bronzeville. From the street you can see Cantilevered Roofs, floor to ceiling windows and glass hallways connecting pods of classrooms. The building reminded me of Mies van der Rohe.

I tired to find out more about the building, but was unable to learn any additional information through google.

By James B. Kelleher and Mary Wisniewski, Reuters

(Reuters) – Chicago will close 54 schools and 61 school buildings by the beginning of the next academic year in the country’s third-largest public school district, a move that union leaders called the largest mass closing in the nation.

The district will shutter 53 elementary schools and one high school by August, primarily in Hispanic and African-American neighborhoods. The district, which has a $1 billion annual deficit, has said it needs to close underutilized schools to save money.

Enrollment in Chicago Public Schools has fallen 20 percent in the last decade, mainly because of population declines in poor neighborhoods. The district said it can accommodate 511,000 students, but only about 403,000 are enrolled. It said that nearly 140 of its schools are more than half empty… Read More