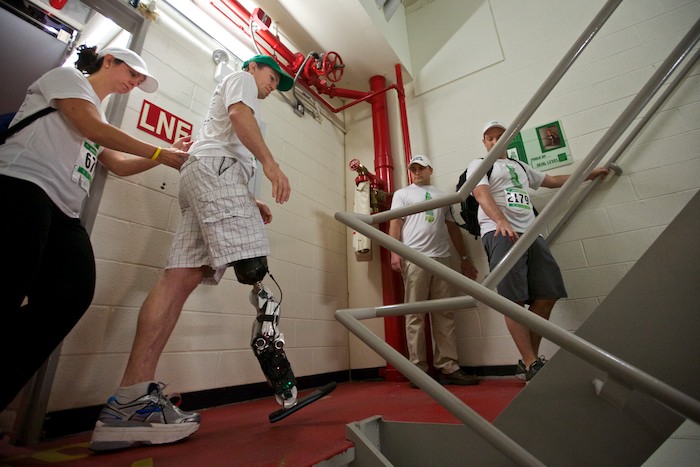 Zac Vawter, a 31-year-old software engineer from Seattle Washington, climbs 103 floors to the top of the Willis Tower using the worlds first neural-controlled Bionic leg in Chicago, as Physical therapist aide Suzanne Finucane (L) looks on November 4, 2012. According to the Rehabilitation Institute of Chicago, their Center for Bionic Medicine has worked to develop technology that allowsÃƒâ€šÃ‚Â  amputees like Vawter to better control prosthetics with their own throughs. REUTERS/John Gress

Most of us climb stairs.

Many of us would complain that it’s a burden to ascend three floors, but for Zac Vawter, climbing to the third floor of the Willis Tower today was an accomplishment and making it to the 103rd floor was historic.

Vawter took approximately 2100 steps to climb 1353 feet with the world’s first neural-controlled Bionic leg, according to the Rehabilitation Institute of Chicago. Their Center for Bionic Medicine has worked to develop technology that allows amputees, like Vawter, to better control prosthetics with their own thoughts.

The first time I heard of theÃƒâ€šÃ‚Â bionic legÃƒâ€šÃ‚Â was in April of 2011, Ãƒâ€šÃ‚Â when I watched 20-year-old Hailey Daniswicz, who lost most of her left leg to bone cancer, operate the leg of a computer aviator using her thoughts and electrodes attached to what was left of her own leg. It was inspiring seeing the technology and the sheer joy it brought to Daniswicz’s face.

Seeing Vawter, who lost his right leg to a motor cycle accident, now use the same technology to scale the Willis Tower, only made my mind wonder just how difficult his journey has been and just how empowering this moment must have been for the father of two. I am sure the joy he felt, is something many of us have never experienced.